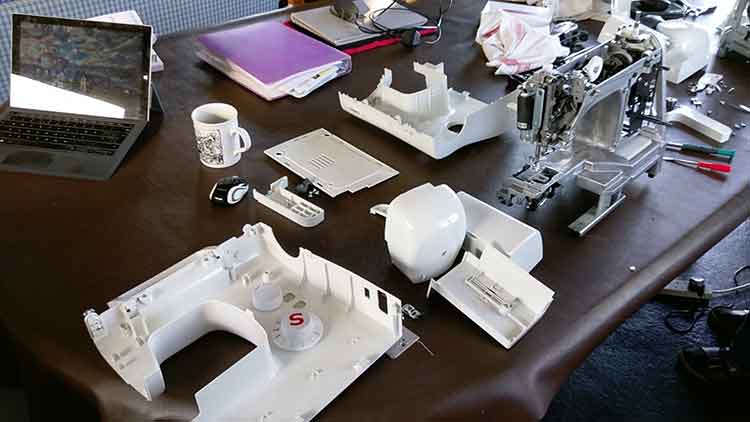 For the majority of my beginners’ “Kickstart Dressmaking” course, my aim is to demonstrate each step of the construction process, by making up the same pattern, stage by stage. Because my learners are beginners, most of them – if they own a machine at all – own a fairly basic, budget model. For this reason, the machine I use for my demonstrations is a 4-year-old, Lidl-special, Singer Serenade. They’re cheap but functional, and there’s little to go wrong. In terms of a sub €100 sewing machine, they’re great value for money. I’m a fan. Of those pretty-looking sewing kits that contain dozens of pre-wound bobbins and small spools of colourful but, ultimately, poor quality thread, less so. 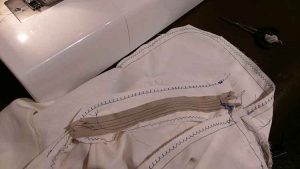 The focus of the Kickstart course is to make up a sample pair of shorts, cut down from a McCalls trouser pattern (the original of which is included in the course fee), and Saturday’s first task was to install the fly-front placket zip. Before we did that, I needed the learners to finish the raw edges of the fabric using a zig-zig stitch. As usual, I demonstrated how to set up the Serenade for zig-zag and showed them what was required. However, on holding up the finished piece, I realised that the stitch was only, in fact, zig-zagging on the upper side of the fabric. Underneath, the stitch looked more like some sort of overcasting. 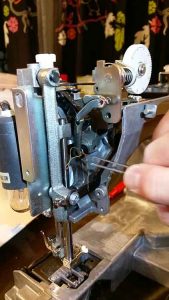 To a newbie sewist, misbehaving thread tension can seem confusing. Somewhat illogically, if the stitches on the upper side of the fabric look fine, but the underside seems loose, you can be sure that the issue lies with the needle thread tension. Conversely, if the upper stitching looks loose, but the underside looks good, then the bobbin tension is to blame. I did a quick visual inspection of the needle thread pathway, checked the tension dial, re-threaded the machine, and tried again. There was no improvement. “Perhaps it needs a service?” offered one of the learners.

While not entirely a bad idea, it often pays to investigate a little further before seeking professional help – particularly if the machine has shown no previous signs of a problem. Most service technicians will charge a minimum of €40 and €50, assuming that no parts are required, and it can take several weeks before it is returned. Too many people, faced with a €50 bill for a machine that only cost €80 in the first place, will simply put it back in its box and stash it away under the stairs when, in fact, all that is required is bit of a clean or a new needle.

I’m somewhat ashamed to admit that, rather than delay the class by fetching another machine, I completed the day with the misbehaving zig-zag stitch. After the class had finished, John and I took the cover off the Serenade and pretty much immediately identified the problem. A 6″ length of broken thread had jammed in the needle bar crank. Having exposed the whole mechanism, John gave all the moving parts a good clean and carefully teased out the thread with a pair of tweezers.

This brings me to my next pearl of wisdom. When dismantling anything that has more than half a dozen screws, it’s a good idea to put in place some system for identifying where they all belong. Having replaced the cover and tightened everything up, John found he was left with one spare screw and a small tubular spacer, for which we could find no obvious home. There was nothing for it but to take the slightly risky step of stripping down an identical Singer Serenade in an effort to ‘spot the difference’. Then, big children that we are, John and I raced each other to see who could put their machine back together quickest! 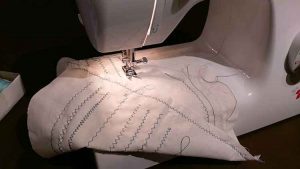 Our efforts paid off and, having spent nothing more than a fairly pleasurable hour or two, stripping down, cleaning, and reassembling the two machines, they are both now working perfectly again. The moral of this story is not be tempted to use cheap Chinese thread in your sewing machine. It’s a false economy. The thread that comes in those pretty boxes from Lidl and Aldi is entirely unsuitable. Weak thread can easily break and jam inside the machine and its stretchiness (in comparison with a good quality machine thread) can affect the tension settings – especially with more expensive, computerised machines. Oh, and don’t forget to keep an eye on your loose screws!

5 thoughts on “Value for money or false economy?”