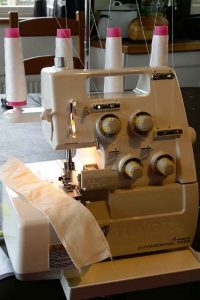 Goodness knows how, but I carelessly broke one of the guide pins on my trusty Huskylock 905 overlocker, and my backup machine has been left in France, after I was firmly told that there was no room in the car after our summer break. I’m running an overlocker workshop next weekend, and experience has told me that in any class of 4 people, at least one person is likely to have some sort of issue with their machine. Rather than waste valuable class time, I always like to have a spare overlocker on hand just in case we can’t get it going, so I decided to treat myself to a new one.

The machine I chose was a Toyota SL3335 (one of several SL1T-X Series machines), which was reduced from £219.00 to £185, making it not very much more expensive than the Pfaff I bought from Lidl a few years ago. The reviews were good and, though I’ve never had a Toyota sewing machine, I trust the Toyota brand.

Delivery to the Republic of Ireland was stunningly quick from Eastman Staples, via Amazon – ordered on Tuesday, delivered on Friday!

So, straight out of the box, the machine has a pleasingly robust feel to it. It came threaded with four mini cones of fairly poor quality white thread, which immediately broke as I chained off to remove the sample fabric from under the presser foot. Oh, snap! Nevermind, I’ll need to know how to thread the machine anyway, so straight out of the box is as good a time as any.

The threading illustrations in the manual are unhelpfully small and, while the machine appeared to be chaining and cutting, it was not stitching. So often it’s just a seemingly insignificant detail in the threading order that can make all the difference, and this case was no exception. Having had several unsuccessful attempts, I eventually resorted to YouTube and found this excellent tutorial from aisin.fr -a French gentleman, I’d guess, but the video is clear, well-made and silent, so there are no language issues to worry about. Anyway, Monsieur Aisin seems to be a bit of an expert in the field of Toyota sewing machines: https://www.youtube.com/watch?v=vg4Rjnzh4aQ. Contrary to the the user manual – and every other overlocker I’ve ever used – he threads the lower looper first. I’ve no idea what difference this sequence could possibly make, but it worked! Having run a calico sample through the machine several times (to loosen up the new mechanism and distribute any lubrication), the machine produced a nice even stitch. The factory tensions settings were pre-set at 5 (left needle), 3 (right needle), 3 (upper looper) and 3 (lower looper), and I didn’t feel the need to alter them. 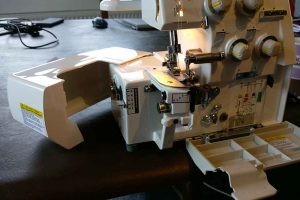 What I particularly like about this machine is the accessibility. To thread the lower looper, you simply swing the left-hand side cover open and turn the hand wheel until the thread guide is visible. This arrangement also makes cleaning the machine a doddle. The mechanism is simple, compared to many, and the parts seem good quality. For such an inexpensive machine, it seems to check all the boxes for functionality too. There’s an adjustment for the presser foot pressure and you can alter the differential, stitch length, and cutting width. There’s even a neat little lever that takes the stitch finger out of the way for a rolled edge.

At £185, one doesn’t expect too much in the way of accessories. This machine comes with two little packets of good-quality Organ HAX1 (705/130) overlocker needles in sizes 11 and 14, a small flathead screwdriver for changing the needles, a pair of (frankly, rather useless) tweezers, 4 cone nets, and 4 spool adapters. What I liked best was that it came with a waste tray. My Huskylock has a nice little net bag for catching off-cuts, but so many of the more basic machines leave you to find your own solution.

What’s not to like about the Toyota SL3335? Perhaps the only thing that lets it down is the multi-language User Manual. For my middle-aged eyes, the typeface and illustrations are just too small. But that’s a minor gripe. I’ll need to use the machine a bit to fully explore its capabilities, but initial impressions are that it’s a great little machine for the money.